Days are long, but years are short…

“The days are long, but the years are short.”

That’s a quote I came across recently and it makes so much sense. It’s similar to this one:

“Isn’t it funny how day by day nothing changes but when you look back everything is different…” (C.S. Lewis)

It got me thinking about how we keep on waiting for later, we postpone until later, we continuously think that something will change later, or we are waiting for that particular, special day, of course – later.

Many people keep things in their wardrobes, cupboards or desk drawers for “later”. For a special day. We are convinced it will come, however elusive it may seem now. We keep the luxurious dress for a special occasion. The set of porcelain plates, the silver cutlery, the special knife. The fountain pen, a cherished gift. We don’t use it. We use the plastic biro pen and keep the nice one – for later. For a special occasion.

A special occasion? In any case, she certainly didn’t wait for “later”.

Most of us are familiar with overspending. We know how it feels to worry about the out-of-control credit card bill. The stack of bills to be paid while we’ve spent money on something that, to be honest, wasn’t needed that urgently. And like many yogis I’ve had thoughts of downsizing, buying less, living with less, practising non-attachment to things, letting go. Clearing out. Getting rid of things that weigh me down, feeling light again.

But how about underspending? How about the habit of not utilising the nice things we already have because the day doesn’t “warrant” it? The occasion isn’t grand enough? Or, what if there’s actually no occasion? Because let’s be honest, most days are kind of similar. Most days are not the “special occasion type of days”.

Isn’t that as much reason to ponder? 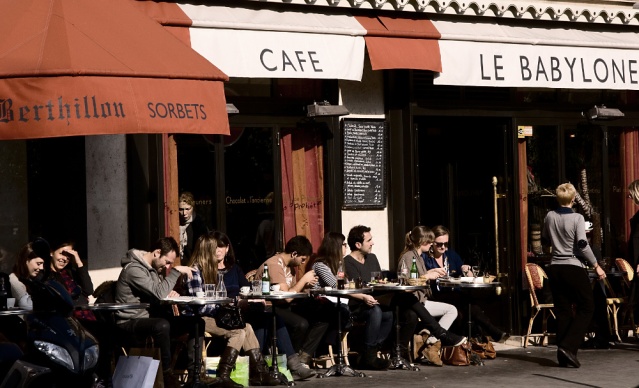 A nice meal on a sunny terrace. Why? Because.

Many books have been written about the French savoir-vivre, about the French, light & fluffy lifestyle where slim, pretty people continuously seem to be enjoying themselves. Of course that’s not the truth. What I did realise though (both from having lived in Paris and being married to a Frenchman) is that French people don’t engage in underspending. If you own a gorgeous dress and the sun is out, you simply wear it! If you feel like it’s a great day (or even if you feel the day is soso and needs a booster) you put out that awesome cutlery and buy or cook yourself a magnificent meal, enjoying every bite. Champagne? Why not, at least a reason to use the expensive glasses that collect dust in the cupboard!

I feel we can also learn something from children. They’re creatures who haven’t been engaging in this strange “adult like way of thinking”, and it would never cross their mind to put their favourite toy in the cupboard – to play with it later, on a special day.

So how about we fully enjoy what we already have, and instead of waiting for “that special day” – we just pretend that this day is today. And then maybe it turns into the day we were waiting for. Who knows?

And one last quote: